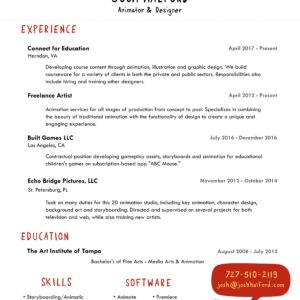 I am an animator with over 16 years of experience in 2D animation, character design, motion graphics and graphic design. I started in television, web and mobile game content. Currently, I have expanded into developing elearning content.

Developing course content through animation, illustration and graphic design. We build courseware for a variety of clients in both the private and public sectors. Responsibilities also include hiring and training other designers.

Took on many duties for this 2D animation studio, including key animation, character design, background art and storyboarding. Directed and supervised on several projects for both television and web, while also training new artists.

Contractual position as lead animator on a series of interactive learning tools for K-12 students and their parents. Designed characters, backgrounds, assets and supervised other animators.