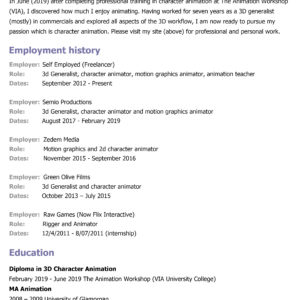 In June (2019) after completing professional training in character animation at The Animation Workshop (VIA), I discovered how much I enjoy animating. Having worked for seven years as a 3D generalist in commercials and explored all aspects of the 3D workflow, I am now ready to pursue my passion which is character animation.
At the moment I am freelancing, as well as working on my own projects. Worth noting is that I am eligible to work in Europe and the UK because of dual citizenship and British national insurance number.

Foundation in Art and Design